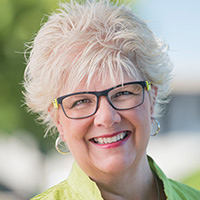 Under her leadership since 2001, the Foundation has increased its grantmaking by 100 percent and endowment from $8,000,000 to $25,000,000; established girlsBEST (girls Building Economic Success Together) in 2002, the first permanently endowed fund just for girls at any women’s foundation in the world; and launched MN Girls Are Not For Sale in 2011, a $5 million cross-sector campaign to end sex trafficking, which has resulted in a sea change in Minnesota’s response to this issue and leveraged a $27 million state investment ($5.40 ROI).

In August 2016, the Foundation launched the $40 million Young Women’s Initiative MN, a public-private partnership with the Governor’s Office of the State of Minnesota targeted to young women of color and other young women who experience the greatest disparities in outcomes; it is the first statewide initiative of its kind in the nation. The Foundation is recognized for its production of landmark research on the status of women and girls in Minnesota and on issues of community concern, including sex trafficking. Lee’s leadership to integrate of research, public policy, and grantmaking ensures that every Minnesota woman and girl has the power to create and lead a safe, prosperous life.

As a leader, Lee is recognized for her thought-leadership, building the women’s funding movement, and use of research as the basis for grantmaking and policy priorities. Says Lee, “Research without action is pointless.”

Well-respected among women’s foundations around the world, Lee founded and serves on the Executive Committee of Prosperity Together, a nonpartisan coalition of public women’s foundations who at the White House in November 2015 publicly committed $100 million to improve the economic security of low-income women and their families in America. She is a trustee of CaringBridge, a global nonprofit whose mission is to amplify the love, hope, and compassion in the world to make each health journey easier. And, Lee is former board chair of the Women’s Funding Network, the world’s largest philanthropic network of over 100 women’s funds and foundations devoted to the well-being of women and girls.

Lee has won numerous awards over the years. Most recently, Lee was honored by American Family Insurance as recipient of its 2016 Women of Purpose Protection Award (August 2016), given each year to one outstanding leader who exemplifies company’s mission to “Protect” and who demonstrates physical, emotional, and environmental assistance in their communities, ensuring a brighter future for all. And in September 2016, Lee received the 2016 Distinguished Alumni Award from Augsburg College, in recognition of significant achievement in vocation, for outstanding contribution to church and community, and for a life that exemplifies the ideals and mission of Augsburg College.

Prior to joining the Women's Foundation of Minnesota, Lee held leadership positions in the anti-poverty, social justice and disabilities communities, and she owned her own business.