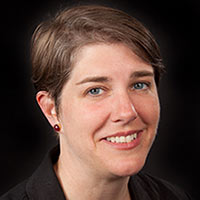 Harden is an experienced nonprofit administrator and has been working to realize the mission of YWCA for 18 years at the local, regional, and national levels, providing both operational and governance leadership.

Harden began her YWCA career at YWCA Tacoma/Pierce County and then moved back to her hometown to serve on the executive team of the YWCA Annapolis and Anne Arundel County. She was serving as the CEO of YWCA Greater Baltimore when she was hired as the executive director of the YWCA Mid-Atlantic region, a network of 40+ associations in nine states, where Casey pursued a vision of organizational excellence for the region, in mission delivery, operations, and leadership.

She was hired to serve on the executive team of the YWCA USA in 2013, and was promoted to the position of Senior Vice President. She has been involved in the global work of YWCA throughout her tenure, including formal appointments to key World YWCA initiatives. Harden received her B.A. from The Evergreen State College.