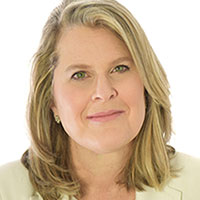 In 2011, Jamie founded GiveCorps, a community building and online giving SaaS software platform that was acquired by Network for Good, the nation’s largest online charitable giving company, in 2015. Before becoming an entrepreneur, Jamie was a managing director at Deutsche Bank/Alex. Brown, where she enjoyed a 16-year career, and led several groups within investment banking, including the Private Equity Coverage Group, managing relationships with DB Alex. Brown’s private equity clients.

In 2015, Jamie was honored to have been invited to speak to Giving Pledge members at the launch of American Philanthropy, the Smithsonian Museum of American History's new permanent collection on philanthropy in the United States. She has also been featured in publications including the Wall Street Journal, the Huffington Post, the Chronicle of Philanthropy, the White House Social Innovation Blog, NTEN, The Baltimore Sun and many others. She is featured in the recently released book, Women Make Great Leaders, by bestselling author, Jill Griffin.

Jamie is deeply engaged in her beloved city of Baltimore. In addition to serving on a range of local and national nonprofit boards, like Open Society Institute, Impact Hub Baltimore, Venture for America, and Johns Hopkins Social Innovation Lab, she is the founding chair of Light City, an international festival of innovation and light, which has attracted more than one million attendees since she led its launch in 2016.